Say hello to the Nemesi! 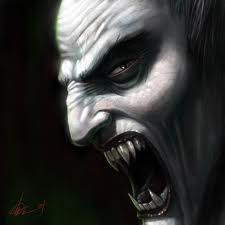 Today marks my one year anniversary of my blog and it also happens to be Halloween, I thought it would be apropos to introduce my vampires from Clear Ether. I like the caste system and heritage of the vampires developed by White Wolf but I also wanted something with more of a scientific bent to it, so I borrowed elements from all my favorite vampire genre and added a few of my own. My vampires call themselves the Nemesi. Allow me to introduce them… There are only a few old languages that have words for vampire -- Hungarian is one of them, and for good reason. That was where the vampires had first arisen on Earth. Despite everything, tales of vampires have persisted throughout history, but as is usually the case, there is a kernel of truth behind the legends. However, it was not a curse from Satan or Cain as some of the old tales have guessed at, or in countless books or movies, but a simple meteor carrying an alien phage that was the true culprit. The records from that time are of course nonexistent as it happened many thousands of years ago, before written records were kept. When the alien bacteriophage affected the first humans it was quickly spread as it was in a virulent form, any open sore was an invitation for the phage to spread and turn the inhabitants into monstrous blood hungry scavengers. The stories held that those first few months were hell on Earth for the villagers near the crash site of the meteor. Unable to come to grips with their condition they savaged each other and it became a matter of survival of the fittest in the most literal sense of the word. When it was all said and done only a few had survived the savagery that destroyed several villages - thousands had perished. The few that managed to survive came to understand what they had become and realized that if they continued they would surely die, as there were no other humans left in that part of the country. They would have to move into other areas and carve out what they needed from the local population and move on. Over time they figured out how to handle their desperate situation and even to prosper from it. Living forever has distinct advantages when that was coupled with perfect recall. They eventually became very powerful, controlling the black markets and the politicians from almost the beginning. Some managed to dabble in legitimate enterprise, but most found the easy path of crime and corruption to make their fortunes. They kept their numbers low, and had their own reasons for creating new members of their family. There is no central controlling body, but the powerful leaders of each area do whatever they must to keep the Komedia, their word for keeping the secret of their existence. They don’t want to lose their fortunes or their lives to the raving lunacy of the newborn Nemesi, those that can’t be controlled are destroyed and their creator with them, so it makes creating a new offspring a challenging task, one not to be taken lightly. There is a council that meets regularly to take on the big issues, but the rules that they use are all agreed to and very minimal. The bite of a Nemesi is fatal if not counteracted, although it is said to be pleasurable to be bitten, due in large part by the fact that the poison also has a powerful narcotic. It’s the blood that heals. The phage transmutes the blood into cruen, a healing elixir. It keeps the vampire young and vigorous and heals even the most grievous wounds. Humans can ingest cruen and it will prolong life and heal ailments, but has resisted the many attempts made by Laurent’s pharmaceutical company to be duplicated in any fashion for public consumption. Many Nemesi have a cortége of humans that they feed from and some are known to be extremely old. The organs of a Nemesi are still intact, but most are no longer used. The heart still beats and fuels the body with cruen. Garlic does nothing to a Nemesi, but there digestive organs are very sensitive to regular food and it will give one indigestion. Blood is all they need to ingest, human blood the preference. They will not burst into flames in sunlight, but have what is the equivalent to a sun allergy. A cross means different things to different Nemesi. Some are quite pious and others are shockingly evil. The phage itself has an amazing effect on animals, enhancing all the things that make them attractive to another of their species. It makes them the perfect hunter of their own kind, humans included. It not only gives them remarkable healing powers, but makes them stronger and faster than a normal man. It also imparts strange mental powers, with the ability to manipulate the morphic field created by the brain and allows them to read emotional states and get impressions from others, as well as influence their behavior and memory. The downside to being a Nemesi is the never ending thirst for blood and perfect recall, to remember in perfect detail every kill and scream. Some may relish it, but to others it’s a very heavy burden to bear. Happy Halloween! Read More