1970 – Year of the Muscle Car and Bellbottom pants

Jane Ann McLachlan had this great idea for a blog challenge for the month of October to do one day for each of the first 25 years of your life.  This is the 7th installment. 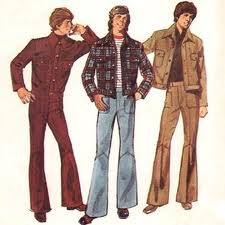 In 1970 the Dow continues to drop all the way down to 631 but climbs back up to close at 838 by year end.
Inflation was at 5.84%
Average cost of a new house: $23,450 up almost $8k from last year
Average income: $9400
Gasoline: $0.36 a gallon
Movie ticket: $1.50
Voting age is lowered from 21 to 18.
The Isle of Wight Festival takes place with over 600,000 people attending and every big name in Rock plays.  Janis Joplin and Jimi Hendrix both die of drug overdoses shortly after that.  Bell bottom pants are becoming the rage.
Black Sabbath releases their debut album, right alongside of the Jackson 5.  Could two albums be any more different?
The Beatles officially break-up, then release their last album.
Apollo 13 has its oxygen tank explode but the crew MacGyvers the capsule back to Earth safely.  I think I was pretty much oblivious to this when it happened.
Vietnam War protests continue with the US invasion of Cambodia and the Kent State shootings take place.
Monday Night Football debuts.
The coolest thing about 1970 is the cars.  The Charger, the Challenger, the Hemi Cuda, The RoadRunner Superbird, the Mach I , the Boss 302, the Chevelle SS, the Firebird, the Camaro, the Corvette, the GTO Judge, the Cougar, the Buick GSX, the Olds 442, the Thunderbird, all of these were super cool looking and had a lot of power.  Custom vans were becoming popular.  Oh, and let’s not forget the Pinto. Heh.
I start first grade in the fall and I remember my mother taking us to the school to meet my teacher before it started.  I remember Mrs. Mallory to this day.  The first day of school one of the older neighbor kids walked with me.  It wasn’t far, just a few blocks.  I walked it every day after that by myself.  I can’t even imagine doing that with my kids.  We are way more overprotective.
I was actually excited about going to school, and thinking about this made me realize that at some point in the coming years I was no longer excited about going to school or learning, and it took a long time to get that love of learning back.
It really is a sad thing that we don’t do a better job with not just education but the entire idea of learning.  It’s something we should all be excited about and encourage in everyone.  Public school seems to take the joy out of learning.  I can see it clearly  now, especially since my wife pulled my youngest out of school and they are on an adventure together learning all kinds of great things and having fun at the same time.
Clear Ether!
Read More